Home > About Us > Our Team > Honorable André Ebanks, MP 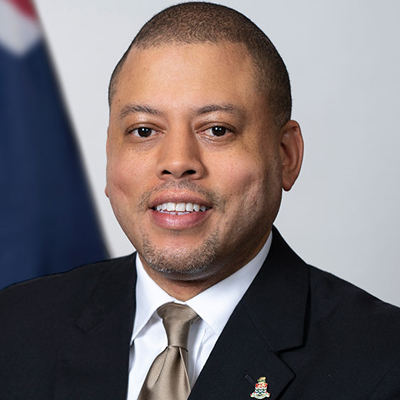 Minister of Financial Services and Commerce

The Honourable André Ebanks, MP, was given ministerial responsibilities for financial services and commerce following his election to the Cayman Islands House of Parliament on 14 April 2021.

Before the 2021 election, Minister Ebanks was the Cayman Islands Representative to the UK and Europe from 2019 to 2021. His role included representing Cayman’s political, policy and regulatory affairs; liaising with other Overseas Territories and the UK Foreign Office, business development, and assisting Caymanians with a wide range of matters.

He was deputy chief officer in the Ministry of Community Affairs, with primary responsibility for the Department of Children and Family Services, the Needs Assessment Unit, and the Gender Affairs Unit from 2018 to 2019 and a senior policy advisor in the Ministry of Financial Services from 2014 to 2018.

After obtaining a Masters in Legal Practice from Manchester Metropolitan University, Minister Ebanks was called to the Bar of England and Wales in 2005 and to the Cayman Islands Bar in March 2006. Minister Ebanks also holds a Bachelor of Laws from the University of Liverpool and a degree in sociology from Morgan State University (Maryland).

Among his professional and civic activities is his membership with the Honourable Middle Temple in England. He previously was an ordinary and council member of the Caymanian Bar Association, and the Cayman Islands Law Society. Minister Ebanks also served on various statutory boards and organisations in the community, including Cayman Airways and the Gender Equality Tribunal.